“Sharp, witty and accomplished there is a class to Roberts & Lakeman’s new album that cannot be measured on any known scientific apparatus”

Kathryn Roberts & Sean Lakeman are indeed a famous duo. Maybe the best known in folk circles due to the two well-deserved wins for “Best Duo” at the Radio 2 Folk Awards. People always presume that the difficulty in fame and music is in the ascent, but surely Lords and Ladies have the added pressure of walking their parapets safely once they have been built. Roberts and Lakeman haven’t  installed a hand rail on their high wall though to keep them safe however. They are still dancing, leaning over the outcrop, shouting to the crowd and having a regal ball in plain sight. Their new, fifth album “Personae” is an album of energy showing no lack of original ideas, adventure or showmanship in the realm of fantastical stories.

It all starts with the cover photograph (by Niki Bidgood) which is either an otherworldly rodeo or Roberts is performing a superhero feat of strength with her hips. It is warmly baffling, but in the best possible way. Perhaps as the album is called “personae” it is in the spirit of one “reining” in their outward appearance. The whole scene is like a painting where your eyes cannot be trusted- here you wonder if it is sea or land, it could be either. Whatever the intent, there is a lot of fun to be had here and this definitely spills over to the album. It spills over despite any attempt to keep it contained like a rainbow bucket filled with sparkles. 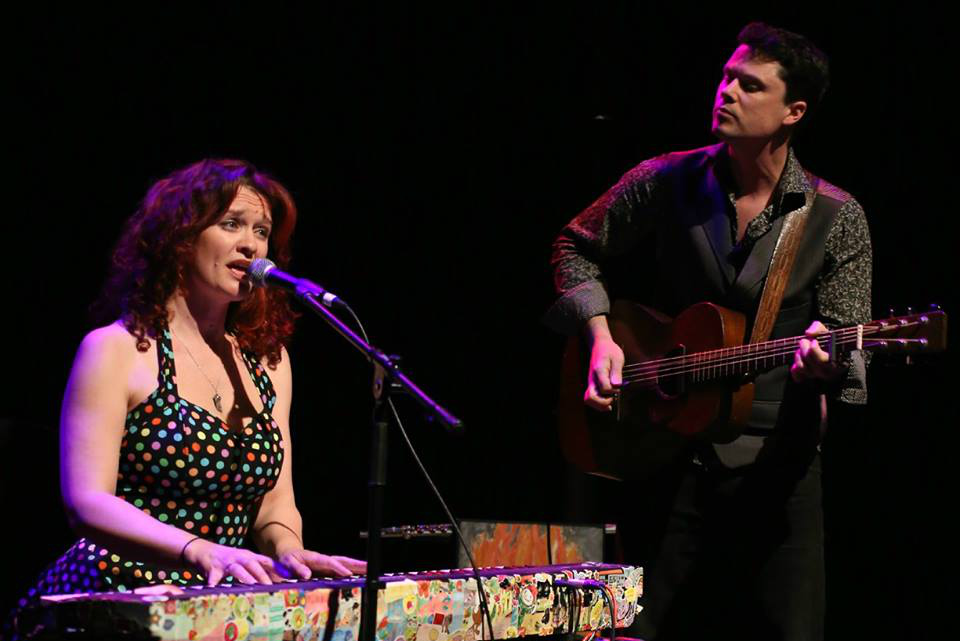 The CD starts with a belting version of Child Ballad 265, “The Knight’s Ghost”. The duo’s rendition makes it rather a favourite for ourselves. We love traditional and maintaining the way things have been; here the song isn’t just elaborated, it is upgraded.  Like most ballads the advice of the story inside is of mixed quality. It does remind how grief can make us take rash actions (as the main subject begins revenge against those that she thinks have done her husband harm) though maybe in everyday life we cannot rely on our late partner’s ghost pointing out our errors.  For an opener on an album it is a vivacious interpretation that benefits from clear guitar work and emotive, nuanced vocals. It is quite a powerhouse. Sam Kelly’s additional vocals are characterful and fitting. Overall when thinking of the track, going back to the comparison rodeos, this song is much like that the bucking animal who sprints out at the fire of the gun, it bucks and hops and is determined and fierce. A great opener. 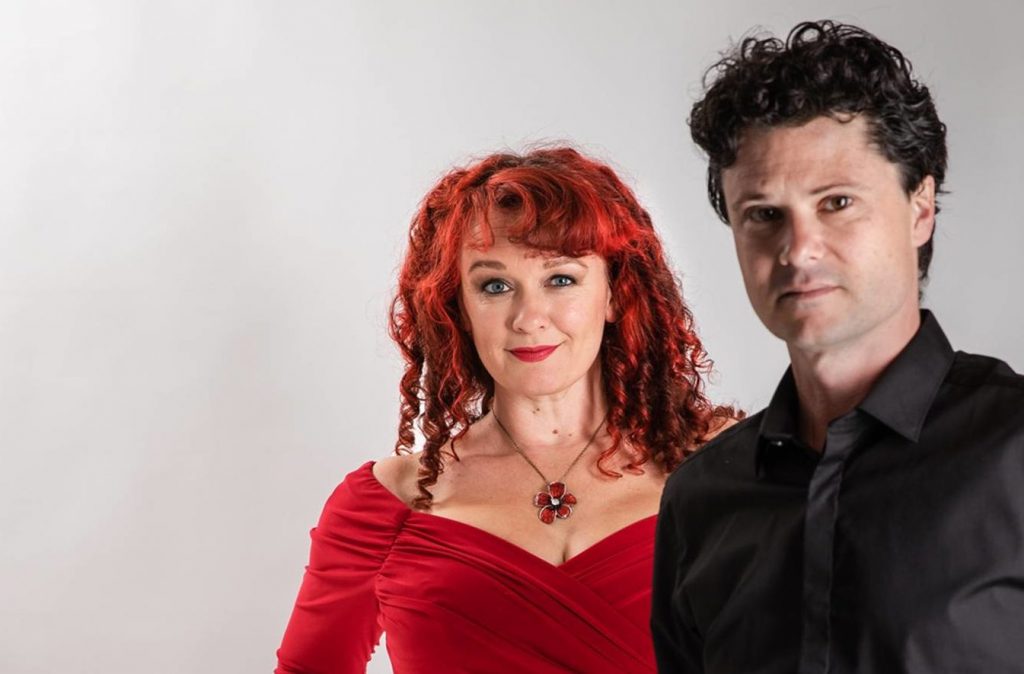 Track 3 “Tribute of Hands” is an original fast-paced number that brings some more of the myth to the table. Inspired by the story of the founding of Antwerp the duo have managed to create something as bloodthirsty and grim as any song from the folk song canon, and it fits especially well. Along other tracks, It forms a  backbone of tracks about history; legends with a slight fairytale kick and mischievous attitude that give the CD a fantastical anchor. The woodwind in the middle ramps up the mystery and wonder, it is as much of the song as dry ice is in a Prince music video. It all works very well as it speeds along exuding charm. We need more fantastical stories of this kind being brought to life, though this might mean I would stop reading fairytales.

“The Street of the Cats Who Dance” is our favourite of the quintessential piano-led ballads on the album. At first we thought the song might refer to Istanbul which I believe is heavily linked with cats, but the song actually refers to St. Malo, a town in France. In history the governors had the idea of unleashing hungry dogs at night to enforce a curfew on wrongdoers. Night time curfews and nightwalking in history are fascinating reading (I have a great book to recommend on this), but this aside the cats are dancing because the dogs were eventually banned from being used in this way following a particularly gruesome death. The song is incredibly well mixed, Lakeman has created some good harmonies of Roberts’ voice which shines throughout. The song has stirrings of early Tori Amos which, in my opinion,  always gets the senses going. This is no Amos tribute though, it moves it’s feet to it’s own beat. It is hard to imagine who else would have the presence to take this song on in the future, but for now this is the least of our concerns. 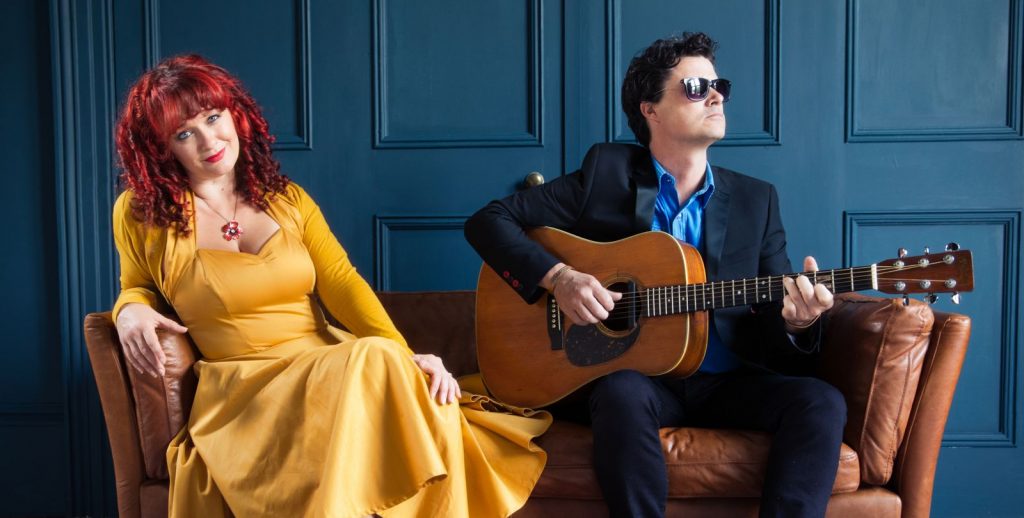 There are many other fine tracks on the album. The vaudeville, “poison club” exemplifies the mischievousness, playful nature of two folk artists quite perfectly listing some of the best ways substances to have fun to (or die from). Their cover of Sandy Denny’s “Solo” is pure beautiful intention, and “Old, Old, Old” (about a Seychelles tortoise) could be part of a growing tradition of the duo pointing out remarkable creatures  in the world around us. Throughout Lakeman doesn’t miss a beat in the instrumentation. It is a credit to his mixing that the weapon of choice on whatever song he is performing on sounds more like a pumped-up army as opposed to a single man, the depth across the disc even on more poignant numbers like “Independence” is breathtaking.

We cannot fault this album. The disc is thoroughly entertaining diving right in and waving to the crowd; it is a work that will be spinning in our music player for periods of time not yet anticipated. For any sci-fi fans it is fairytale in a similar way to Matt Smith’s run on Doctor Who with it’s kind of cool, slightly unusual but prestigious appearance.

Another way to understand the value of this album is to imagine that in the depths of Winter you were cold and someone recommended you buy this disc because it would keep you warm. You might don your pickaxe and hard hat to go down the mine in preparation for finding some coal, but what you would find  instead is a cave of diamonds from floor to ceiling that shine in the dim amber light of your torch. Take the bag that is your heart and fill it to the top.

Which is just as well because energy prices are going through the roof. 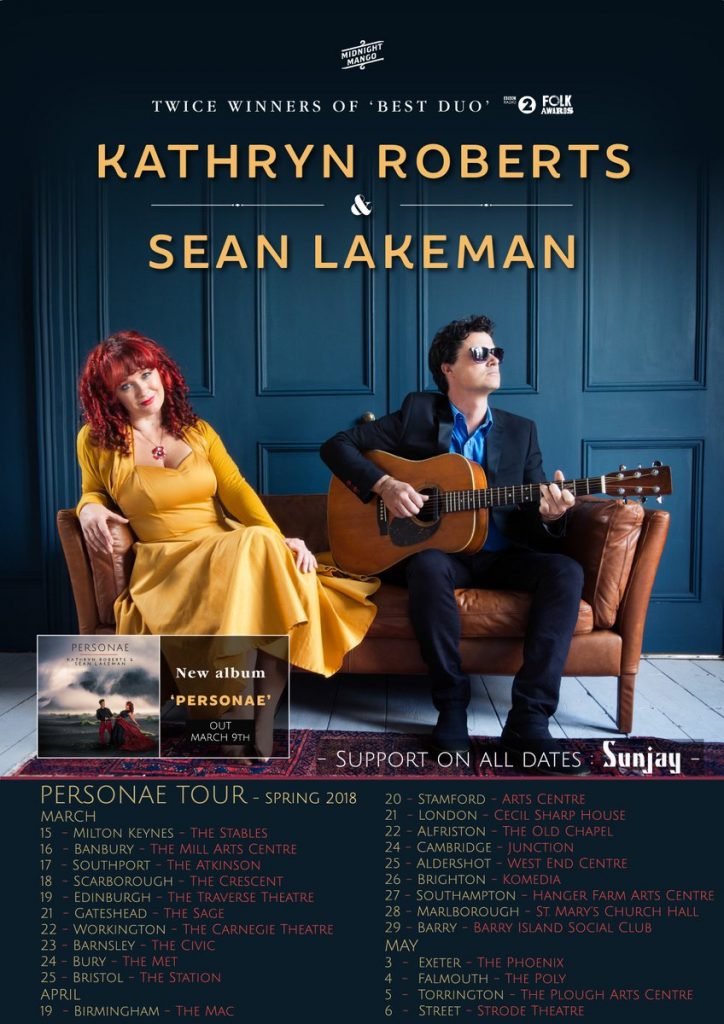 “Personae” is best ordered direct from Roberts & Lakeman at: https://www.kathrynrobertsandseanlakeman.com/

My other half recently interviewed the duo, find out their favourite poisons here, http://www.lastnightidreamtof.co.uk/music/kathryn-roberts-and-sean-lakeman-interview/

(I do not claim ownership of pictures and media referenced in this article, they belong to their respective holders).