“Strong of purpose, unbridled in energy… Steamchicken’s sound is a surprise to many, but a disappointment to none”

There are plenty of good reasons to hide away. It could be the dark, a moment of reflection, or even (at the time of the his writing) to get away from scary snow beasts clawing at your door. Whatever your plan, it is always good to have an accompanying soundtrack to your thoughts (particularly if you are under the weather). The question is then, “Who do I listen to?” Well if you are looking for entertainment and especially to lift the heavy weight of your heart.. then the band “Steamchicken” is the answer.  Who are Steamchicken?

Comprised of Ted Crum (Harmonica, Bass, Melodeon), Andrew Sharpe (Piano), Joe Crum (Percussion), Mandy Sutton (Tenor Sax), Becky Eden-Green (Alto Sax, Bass), Katy Oliver (Trumpet), Matt Crum (Soprano Sax, Melodeon),  Tim Yates (Bass) and Amy Kakoura (Vocals) they are not so much a band but an army of music makers. Steamchicken in their own words are, “Folk with a twist, with huge dollop of blues and ska.” We can’t really argue with this, their feathery wings cover a wide range of influences. It would even be insufficient for us to add that there are elements of reggae, swing and jazz there too because that is the tip of the iceberg to the expansive and inclusive of their sound. 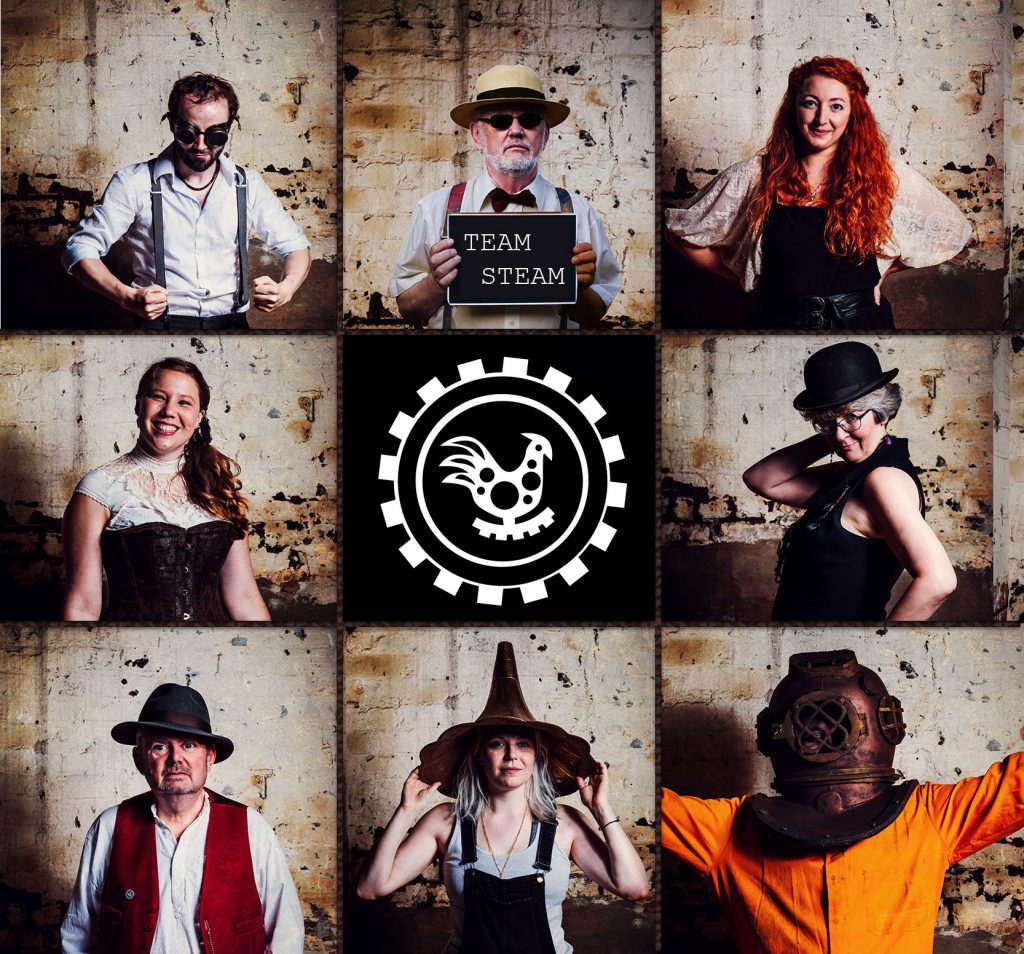 From beginning to end their set is like a child running around in a toy store with the energy and excitement galore that explode from this ennead of artists. There are brass instruments aplenty which blast from left to right and all around, some truly beautiful, sustained harmonica, and the grounding of excellent bass and keyboard, a rich goulash of melodic possibilities that swirl around lead singer, Amy Kakoura. Everything is played exceptionally, the person sat next to us in the theatre are particularly impressed with the drumming which has a rich, technical and clean sound (Joe Crum) but we personally cannot really point anything out in particular. It would be like commenting on your favourite stripe on a tiger.

What we enjoy about seeing Steamchicken is there is a song for every occasion, and then a few more- it is a comprehensive selection. Some of their early opening songs include “Landslide”, a jazz-filled upbeat song about misery and melancholy, their off-beat retelling of “Brigg Fair” with shades of blues and trip-hop aka. Portishead, and Amy Kakoura’s soaring vocals on a streetwise cover of “When I Get Low I Get High.” It is enthusing to see a varied set and the band’s ambition of perpetuating and developing their sound into something wholly theirs. There is a level of mastery here that is cemented with Kakoura’s luscious and varied vocals. After 20 or so years of different lineups and styles, the animated whole of the musical performance might make this the Ziggy Stardust moment of the band.

Steamchicken always come across as a force of nature and there is something primal that is stirred by their sounds. The perfect example from their set is “Western Approaches” (a favourite of ours), a song that makes a boating holiday become more of a tale of adventure in the face of briny elements. When you are just reeling from the fun and frivolity, the set takes a sharp turn in a different direction with the introspective “Gypsy”, an altogether creepier and darker take of Raggle Taggle Gypsy (perhaps the polar opposite of a more jaunty version such as Fay Hield’s). For people of the shadowier persuasion, their song “Foot Falling” has a kind of gallows humour married to and excellent sing-along, dance-along tune about a goddess with a wild, macabre streak who gives a brutal response to the suggestion that she should get married (a fantastic number).

Along with some favourites they also played a few new songs for the audience. There are some good songs here, our favourite is without a doubt “Violet Lane”, a track about enterprising “ladies of the night” and their plans for rich gentleman who visit. They end, as always with an encore of a song that is to them as the night is to Batman, 1947’s “Ain’t Nobody Here But Us Chickens” as fun a tune as you could ask to hear.

It’s not just that the music is great and that they are well rehearsed, Steamchicken clearly love what they do. Much like the train in their Johnny Cash tribute, they keep rolling. There is no dead time in their set, there are a few good-natured quips here and there between band members and a warm audience presence, but primarily it’s a musically rich set that goes at a good pace speed from song to song.

We strongly recommend for folkies, non-folkies and for anyone who doubts that live music can get you moving in your heart and in your feet because these chickens sure can fly!

For more details about Steamchicken check out their website here which has details about their most recent album release, “Look Both Ways” (I presume when crossing the road!)

Also check out their 2018 tour list here to see when they are playing near you!

If you still haven’t had enough of Steamchicken, check out my other half’s interview with the Chickens not too long ago here.