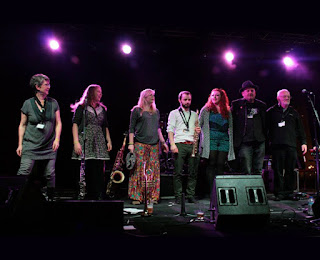 These chickens can play, in a dynamic, captivating performance that stays in the mind

I have recently had the good fortune to be very pleasantly surprised at a local gig in Sheffield; I scoured the ‘net looking for something I’d not heard of and the name “Steamchicken” leapt out at me from the digital screen. Part cuisine, part jazz sounding, it is a name which surely brings uncertainty and surprise so I decided to give it a go; I am so glad I did. Taking place at Shakespeares Pub at the beginning of their tour is a good choice, the pub itself is a good night out by anyone’s money in virtue of the boxes it ticks. Traditional pub? Check. Tons of whisky and real ale? Check again and that’s before checking the furniture that has turned a blind eye to modern pretensions.

In virtue of it’s location as a kind of outpost from the real-ale rich pubs of Kelham Island it ranks up there with the more interesting and honest drinking nights out you can have in Sheffield. This praise comes without any commercial pressure to publicity plug the pub, I strangely only came across it’s existence last year despite living in and out of Sheffield for the best part of 12 years and genuinely find it as a great discovery.

On arrival I was handed one of Steamchicken’s flyers, it has a proud vote of confidence written on it from Blackbeard’s Tea Party who say that:

BTP have a strong reputation and this might be enough to seal the deal for many many live music enthusiasts especially if they are fans of the aforementioned band.. but then you hear Steamchicken amongst the pretty packed space at the top of the Shakespeares pub and realise that something quite special is happening and it’s not just all hype.

And they weren’t doing it alone either. 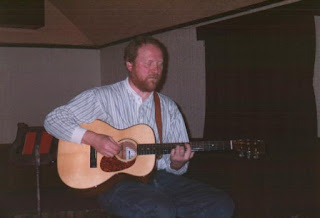 To start the gig had the pleasure of Robin Garside’s warm up act, which as a very well-known local folk musician is a mark of distinction. Robin has been involved in the business of folk for quite a while having as he describes it “done the rounds of the British folk club circuit for years” as well as being involved as a tutor at Barnsley College for their music degree and leader of Sheffield Traditional Fiddlers Society. He has obviously reached the heart of folk and is playing it for all to see as he selected a distinctive set of simplistic, powerful and often incredibly comedic numbers.

He starting with a mildly-disclaimered song “40 miles” warning that is has a rude subtext. In this song you can see some odd connections (most which are probably not intentional) with the Proclaimers. His “40 miles” might be less than their “500 miles” but the subject of Garside’s song is instead relieved that the object of his affection has “opened the door and let me in”. It is a sharp contrast to the pleading of the Scots brothers in “Make my heart fly” that they “can’t do any more to get inside your door”; is the lesson here that Robin has better dance moves and has the key? It is a delightful start that paints a picture of a witty artist who draws the crowd in through the clarity of his music and playing and size of his heart.

He followed later with a song about vegetarianism, an unlikely topic to first springs to mind in folk (unless maybe you are a fan of Merry Hell maybe) but it is a comic wonder of a track where rabbits, fish, and English breakfasts together lament the fact they were going to be eaten and wildly protest to the singer. It is slightly surreal and incredibly jaunty number and a love the fact it is somewhat existential in that it sees a slight absurdity to existence. The humour would not work without Garside’s solid playing and strong voice though, so it is a good job he brought them too!

Another highlight by Garside was a more than serviceable cover of “January Man” by Christy Moore. It is a relatively ballad with a economical arrangement about each month in the year and how it is a character much in the same vein as the nursery rhyme, “Monday’s child”. Robin maintains the simplicity, authenticity and wonder of the track as he strums through the phases of the year from cold to warm describing the frost and wonder within, “the poor November man sees fire and mist, and wind and rain and winter air.” There are some great descriptions here which leads me to feel that it is a song that clearly needs more widespread attention then what it currently gets.

All in all worth the price of admission, and that is before we get to Steamchicken. 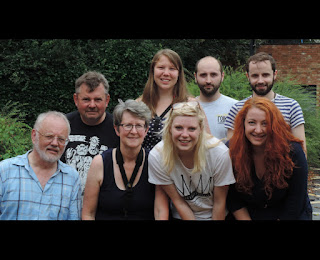 Steamchicken are a particularly energetic and fun group comprising the fantastic Amy Kakoura on vocals, Matt Crum on sax, Katy Oliver on trumpet, Becky Eden-Green on Alto Sax, Mandy Sutton on Tenor sax, Benn Wold and Joe Crum on percussion, Ted Crum on harmonica, and Andrew Sharpe on piano. As can be seen they are brass heavy, and it is this that brings an enviable character to their sound and creates bridges between the genres that they play.

They are somewhat complex and also intriguing with definitive drumming and a sound which describes their interests in folk, jazz, soul and funk in equal measure. For myself it also brought flashbacks to the 80s and 90s too with more than a touch of second and third wave ska. Many of their original numbers reminded of the first and second No Doubt albums and Amy Kakoura certainly has the kind of genre defining sound of early Gwen Stefani and the sense of fun that came from this era of music. The group’s membership has grown over the 20 years that the artists have known each other but regardless of how long each member has been in the band, their coming together show a very apparent level of rehearsal and confidence and the more recent faces have added a nice diversity to their newer tracks. So what of the tracks?

“Boom boom, out go the lights” has the character and energy of a bombastic soul-pop number which contains a dollop of grooving interludes and an engaging harmonica input which is intensely and tightly woven into a light-touch film noire backdrop. It is both punchy and accessible and under the hot pink haze of Shakespeares you could almost see the cigar smoke and neon lights encircling as touching the night air. Similarly there was “Wake Up Juice” a fun, bluesy look at the idea of divorcing booze following a heavy session the night before. Regret might be a common theme in blues music (and this was no exception) but still it carried a resonance and was an interesting inclusion to the session, not least due to the rich of it’s imagery and exploration of “blood on the windows.. blood on the walls”. You can feel the agony wrought into the music here of the hangover and the wonderful passion of misery. We also got some foot-stomping action from some signature Ceilidh songs (old Joe’s jig) and a fine cover of the old song “O Mary don’t you weep” with a bit of audience participation for the famous chorus. 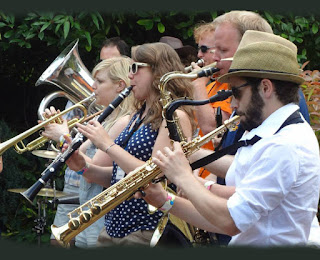 My favourite song of the evening was undoubtedly “Sailing in August” based on Becky (the Alto Sax’s) Summer Holiday. The holiday itself was said to be a mixed affair, but I couldn’t say that for the song. There was a briny, blazing vocal from the lead singer and the song sounded like where it was in absolutely the best sense. The brass moved left to right and there was the sound of the breeze along with the chorus “and the wind blew”. It certainly felt like you were taken out of a place and put into another (which is something for my internal cynic to learn from). Top notch in every sense, atmospheric to the hilt and a belter of a track.

Steamchicken are melodic with a big band sound, an expressive blues singing voice and some accomplished forays with popular numbers as well as their newer tracks. It felt at times that the room struggled to contain them, it certainly feels like Blackbeard’s tea Party were being overly cautious with their remarks given the richness and energy of sound. Along with the great warm up of Robin Garside it is true to say there is something here for everyone too and it is family friendly. It is rare that I instantly think of seeing a repeat gig in the near future but on the strength of character, sound and charm that they bring, it is not too distant or unwelcome thought to have.

Steamchicken are still on tour, details here for a show near you all over the Country and at several Folk Festivals.

For further details of their band and album releases, go here.