Hot on the heels of their previous entry “Tales from Eyam” the latest album from the acoustic duo, Oka Vanga, has arrived. In fact it arrived 31 March but let us not dwell on the time that has passed. As Spring has undoubtedly turned to Autumn with the hints of amber leaves blowing in delightful spirals, what better time is there to review an album of orange and earthy brown? Let us head in and maybe grab a bourbon for the journey while we do. First of all, who are Oka Vanga?

Oka Vanga is made up of Angela Meyer (Vocals, Guitar) and William Cox (Guitar, Ukele, Mandolin) with some input here from Oliver Copeland (Double Bass), Patsy Reid (Violin), and Mark Tucker (Percussion). Angie hails from South Africa; she met the other half of the duo, Will in London at an open mic, and since then they spin some delightful mixes of history and folklore. This is certainly the case with their latest disc, “Dance of the Copper Trail” which also channels both individuals’ love of travel. While the tracks together do not follow a linear story as you might imagine from point A to B on a map, the ideas and subjects combine into an accomplished sensory experience from history which in a way is better, it leaves more to the imagination and personal perspective. The fantastic guiding star of the double bass on the CD brings the veritable bounce of travel you might picture from the Wild West and also opens up the excitement of discovery, much like a child at the sight of a big crimson bonfire and fireworks. The wheels of this old wagon are indeed spinning on their way and as they do the sun is shining on their mahogany hue. 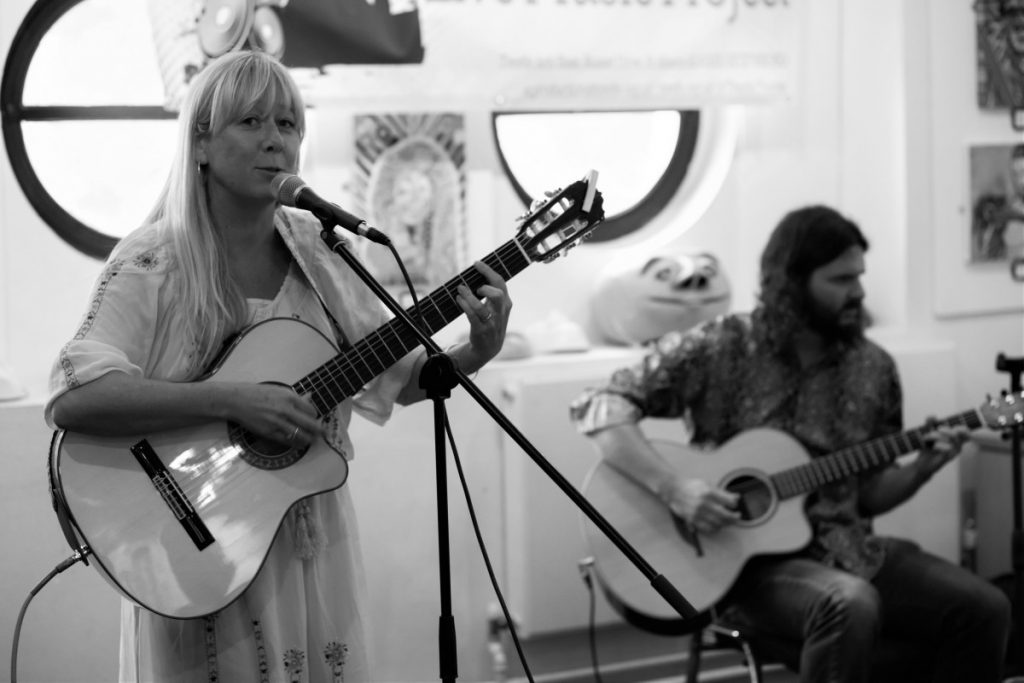 One of the defining factors of Oka Vanga’s previous work, the “Tales from Eyam” EP was an evident well-disciplined approach from track to track. On the disc we saw a creative and thoughtful work as a story about two people in the famous plague village from history, Eyam fall in love and then part with a beautiful yet sad tone. All-in-all it was not a disc for wandering; instead it was like a greyhound chasing the rabbit, it’s eyes were fixed on the prize. In doing so it felt like Oka Vanga either through design or just consistent writing, knew what they were singing about and stuck to it with determination. It was a kind methodical, thorough determination to telling a story and doing a good job of it. “The Dance of the Copper Trail” does much the same except there are more tracks for them to play with; so what we get is tightly, knit professional feel that expands with the extra space. It does indeed touch on the senses and imaginations of what the stories of the “Copper Trail” could in fact be, you get a big sense of the craft at work here. I liked “Tales from Eyam” it was an interesting piece; but the scope, delivery and writing on the new disc is even better, there are several opportunities to inhabit the idea of travel, the Old West and folktale. 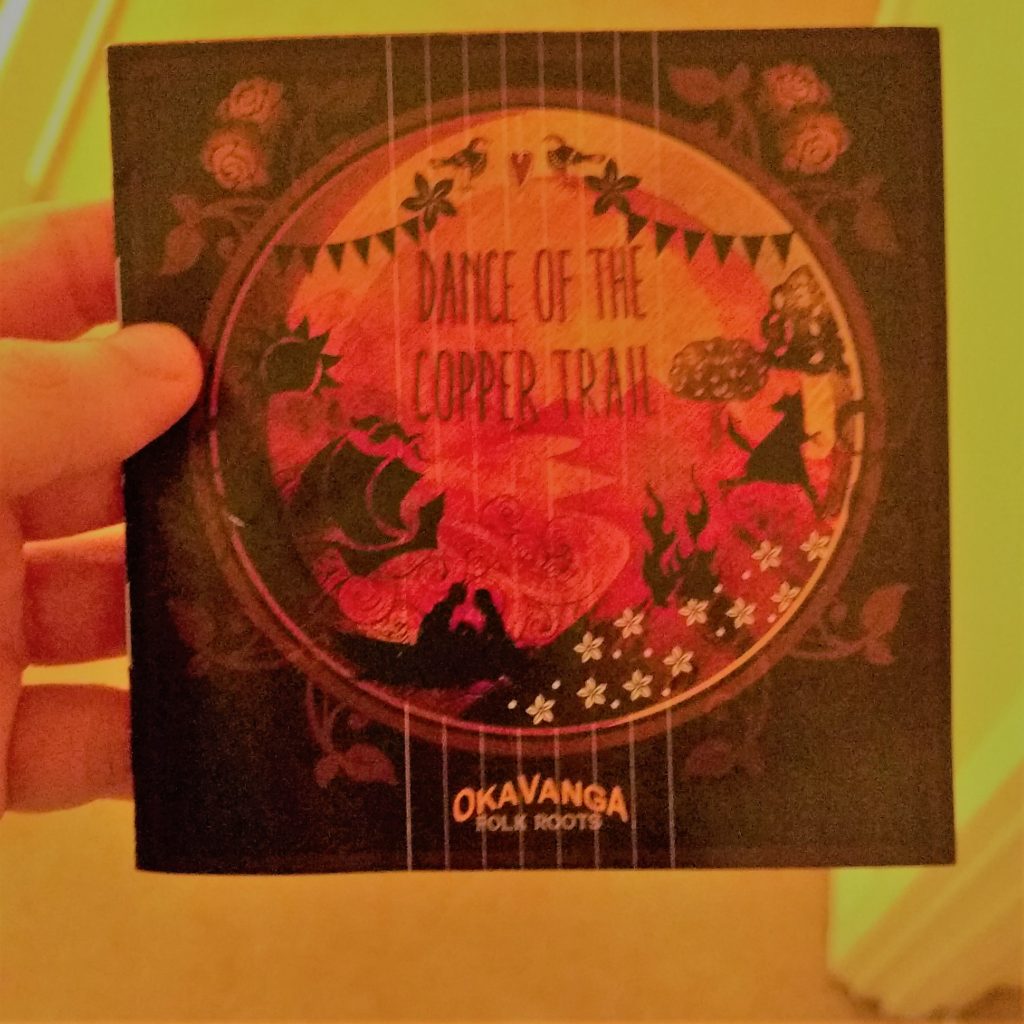 I am keen to talk about the tracks and sound, but lets say something about the artwork. I love it. The browns are like rich grizzly leather and there are reds like vials of turmeric, rusting iron and the aforementioned scraps of copper being forged into tools. The cover has the iconography of a boat, a bear and the sun, it looks very much like a storybook; it is incredibly cool. Credit to Coildesign.net who have surpassed what you would reasonably expect for an album cover, it all helps create the environment which Oka Vanga are looking to share, and it is the first step on the dance they are choreographing.

The opening track, “The Wicken Tree” starts as a mildly mystical expedition into the Rowan Tree and it’s place in myth and history. It ponders, Angie’s voice reverberates, the fiddle seems to lurk in the shadow a little  til the final third; it all works very nicely. Not bombastic and overtly energetic as an opener, but the Double Bass hints at the positive vibes to come. It is slightly shamanistic, there is myth at work as the lyrics entangle our irrational fears and those of our ancestors. I like the exploration of the track and way that it sets the scene. Another track where it seems the song skims the reeds of the mind is the deep, winding and rather spiritual apex of mandolin and tremolo guitar in “Song of the River.” Here Angela Meyer’s voice hearkens, speaks into the black stillness of the Deep South and stirs the surface magic. The wonder you expect is at every turn, and this is further enhanced but the particularly nice mandolin on this track, this should definitely be an inclusion to keep for future works.

It’s not all in the mind though. In fact the album feels very earthy and physical. The joy of nature and the world is really let lose on track 2, “Capercaillie” which kicks it up as a joyous, old-time song about a bird that sometimes sounds likes a horse.  Much like the grouse of the song title, the duo are “flying low in the sun” with this song. Shades of sunshine and the playful side to nature come to the fore, it is smiles all-round. It has the strength of familiarity, a good looping structure and a fun subject matter. It is the kind of track you might expect your young child to like the most from an album, but just treating it is as a song of this level belies that there is some delicate and speedy mandolin at work, and a great warm, universal appeal at work.

For myself, “The Devil Inside” is the standout track on the album. From the opening you might not be sure what is about with it’s mellow enticing work, but like a flash this gives way to a more urgent, celerity with a doom-telling voice, evocative fiddle and omnipresent double bass. It is a track about a semi-mythical female pirate, and as you listen this becomes more and more apparent with it’s talk of the “seas” and the “wind.” You can almost see the shark on the horizon. Even with the sea aspect put to the side, it still feels like a timeworn story from the Americas, and be equally considered a dust-bowl allegory of faith. What we get is a woman with sass who turned heads, knew her mind and possibly broke a few hearts with her flintlock pistol along the way. It is a warning to those good, law-abiding 17th Century sailors but also a bit of a motivational work, “40 years you’ve waited.. to be Captain of the Seas” that tells us that  hard work and perseverance pays off. It is actually quite a venerating little ditty which generates awe and power in a woman I previously knew nothing about, and is a joy across the board. 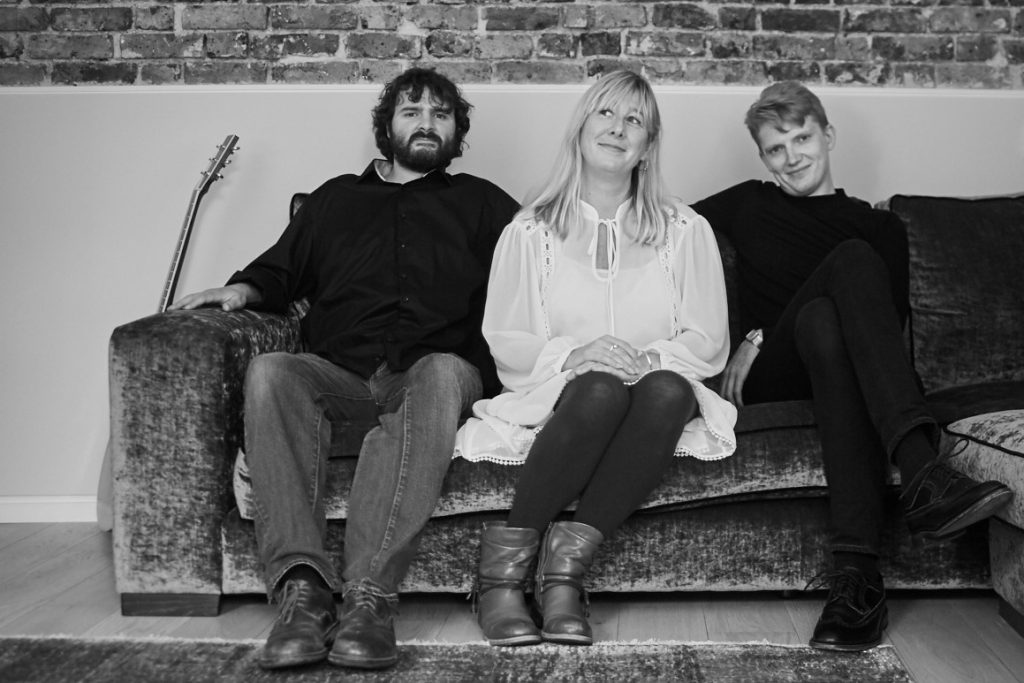 Mentions should also be made for “Out of the Fire” that deals with the main singer’s transitions of thought, the acceptance of stepping back, and returning to music-making that feels as in place as everything else on the album. The final track, a version of Sister Rosetta Tharpe’s gospel song, “This Train” is a lovely bookend to an album bulging with auburn wonder and surely a great crowd-pleaser wherever Oka Vanga goes.

There is variety, yet it all ties in nicely. More importantly there is a spirit of optimism that runs through the disc. Much like the gold panning miner who finds a nugget, the authors of this work have taken an entrepreneurial approach and taken a gamble. Well it has paid off and the result we have is an incredibly listenable album that is tightly managed and has a pretty rich, consistent sound that could not conceptually fit it’s theme any more than it does, it’s great.  Mystical, magical and earthy it’s feet are firmly planted on the ground and it’s taking us on a trail of discovery.

Here is to the road!

If you would like to listen to some samples and find some more information, go to Oka Vanga’s website here where their album is available.

Also, take a listen to this sample below, taken from Oka Vanga at the Village Folk room from Derby Folk Festival 2017!