This is a “Look Back” post, one that brings an older review (from shedancesinthemind.blogspot.com) here to my new website.

Since my writing in early 2016, Saskia Griffiths-Moore has continued to grow with a series of concerts and some well-shot covers of some well-known tracks on her Youtube channel here.

“Gentle Heart” is seriously an album that you might have missed this year, but shouldn’t have. Check out my writing and the video below! 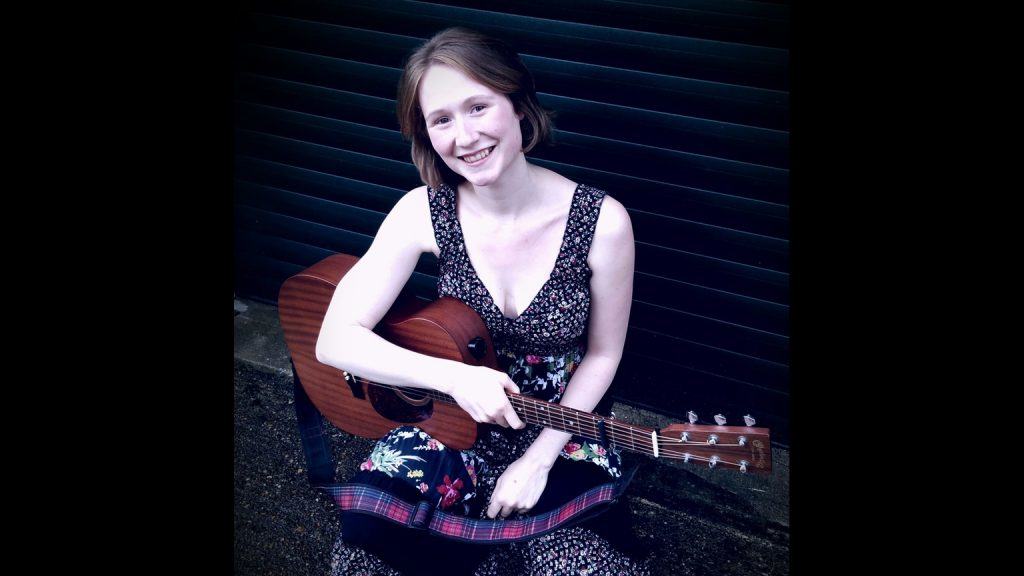 An unabashed genre-hopping album that balances light with dark in a spiritually precise manner and a strong leading voice.

Some albums are like the snow-topped mountains of Asia, full of ancient mystery which might be a little unusual or less accessible to the everyday tourist but nevertheless has a solid following and interest, especially for those who have walked those paths. They push out finding new cliques of knowledge to bring back and impress; others are closer to home, seeking simpler wonders and the joys of snapping branches in the local woods, building their tents amongst their mates with a focus on the warm feeling rather than a physical and mystifying experience.

At a beginning listen to you Saskia Griffiths-Moore’s debut album “Gentle Heart” you would be fully under the impression that it follows the warmer, straightforward approach to music making, but this is a misreading of the use of the word “gentle” in the album’s title. For the artist’s intentions here we find that the core of what she is trying to convey is both the affable warmth of beginnings but also the trying to understand the simplicity of death; “gentle heart” here fosters both creative and destructive forces in equal measure. Sometimes it seems more light-hearted, but it is quite deep and even in the bouncier numbers there is often a reference to change and the end of a good life. There is a lot that the album does well, especially Saskia’s voice itself in contrast to the arrangements. If we look at the influences of it’s production next, it is no surprise that the album strives for this kind of balanced exploration of feeling that is has and succeeds. 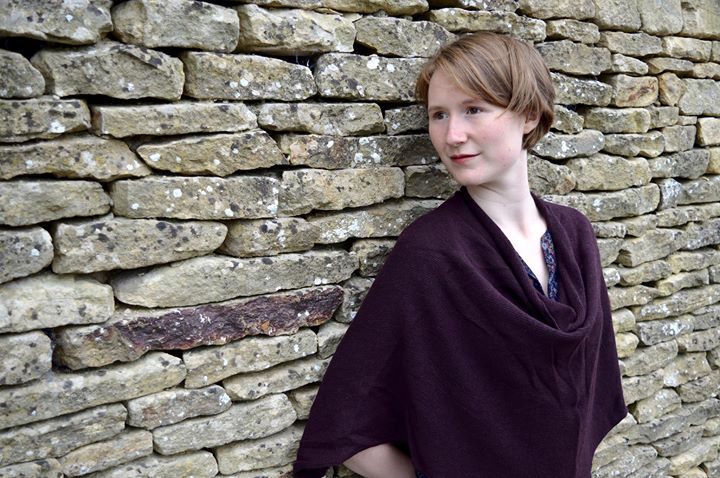 Saskia Griffiths-Moore is a relative newcomer to the music scene but she has made some splashes along the way. She has been named as Bristol’s “number 1 folk artist” through the new artist-friendly ReverbNation (for four months running) and has been on BBC Radio Gloucestershire promoting her music too. The album is produced by Robert N. Neil, a musician whose experiences in publishing alongside Ashley Kozak (who was involved with Brian Epstein and Donovan) and his own albums of instrumental healing (and previous meeting with famous guru, Swami Satchidananda) does bring to the disc the aforementioned yin and yang, and a sense of harmony to the music. The focus is uncluttered which leads to an album which is self-described as “underproduced”, but doesn’t suffer for it and in many occasions transcends the simplicity of the arrangement and message being given (in particular track 3, “Call on Spring”). The rather spiritual ethos of the producer is not overly channelled by Saskia’s vocal talents, but rather through it’s cleanness, clarity and arrangement of tracks to create a piece of music which fits somewhere between genres. There are elements of the acoustic, folk, country, jazz, pop, and singer-songwriter categories and for a debut album is all the better for it as it casts a thread of tenderness throughout it’s tracks that provide easy-listening for the audience but with lyrical interest to be something more.

“In Time” (track 1) is an authoritative-accordion number complete with wisdom, a plethora of chord scratching, and a catchy, simple chorus. Saskia’s voice is quite striking in it’s identity, it bears a strong mid-range much like many several artists at least ten years her senior (she’s in her early 20’s), The lyrics are quite nice too, “of all of my friends, some faces I will see again, and some aren’t around anymore.. but that is a natural law”, they make a mark early on. There is a good presence in this track which relies on the theme of an older person coaching younger members of the family about what they have learnt. It is quite primal and feels like it has hardly been distilled from the experiences that have led to it’s conception and has an air of acceptance of what will be. It is wise-sounding, and slightly cheerfully sung though its words are hinting at themes that will appear later in the album (like a kind of trailer for what is to come). It is an accomplished first track on the album, the chorus is simple yet the repetition of the title throughout with Saskia’s different emphases shows a delightfully clear voice no matter what she is doing with it.

Another track to mention is “Call on Spring” (track 3), a song which veers into the very best territories of singer-songwriter lands. It’s slightly baroque, slightly Tori Amos (Boys for Pele era), and slightly pop ballad and stands enormously strong as a great piano lead that is both light and serious. Once again she employs a hook which will probably reel in young and old alike,”call on Spring, call on Spring, sunshine I will bring”. It is penetrating and lethal as a ballad which due to it’s title and feel has more than a slight touch of the Ostara equinox about it with the rising sun burning the frosty dew, and bringing “renewed life”. It is earthy and could be a rework of a song from history if I didn’t know better, Saskia’s voice is inviting, the piano once again strides and is made all the clearer through an uncluttered and clean mix. 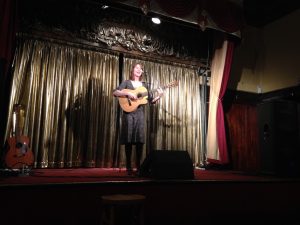 “In the Garden” (track 7) brings a dainty jazz backing to the album as a change of scene. It is a song you would imagine on a veranda in the closing parts of the day when the long drinks are being brought out by butlers with immaculate white gloves. There are some playful woodwind interruptions as well and some higher singing notes that hang like stars in a calming and confident diversion from the other genres on the disc. It is slightly dream-like and manages to capture the senses pretty well, and deserves a listen for it’s crossover value. Not being a jazz fan there was a danger that it would not be to my taste, but once again Saskia’s vocals make it more compelling then it could have imagined to have been.

“Wash it Away” (track 6) brings back the accordion in a more extended introduction and then keeps it as a central part of the album throughout. The guitar chords and technique sound a bit more Country, as is the subject matter which describes someone in later life reflecting on what has been, the movement of time and the role of history, “wash it all away like the river in it’s path, moving slow or rushing fast”. It is an example of the theme of the album which looks at things delicately, and has a mellow appraisal of things that have happened. It is incredibly hard to dislike and quite moving in it’s simple reflective voice and modest use of minor harmonies that are included within.

“The Presence” (track 9) is a moodier song that looks at loss and serves as a slightly less literal look at death before track 10 arrives (Be Not Afraid to Die). It is introspective and starts incorporating the odd bit of phenomenology into it’s being, describing gazing and “unknowables” and things “gazing back” quite akin to the famous Nietzsche quote that you might have heard (in it’s own way), “out the door I peek into what is not yet know, I set on the edge and feel the Presence”. It is slower, more deliberate, achroamatic and harrowing. Saskia adapts quite well to the downbeat nature of the song and the content, though it would be a much lesser album with songs purely around this theme. 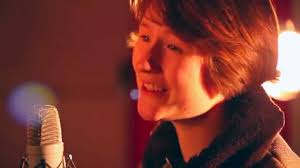 The album is varied, It feels like there is a whole spectrum of dark and light that spreads throughout the disc that touches on a number of musical styles, each which is visited quite well (the ballad style of track 3 being the apex for me). On the whole, I find her brighter songs marginally better than the more solemn ones (though track 9 is a great philosophical de-construction) but there is not much difference in real terms, the songs are all well constructed and a good showcase of her various talents. For a debut it is quite ambitious, but it accomplishes what it sets out to do and provokes a few thoughts along the way. It’s “gentle” nature is a strength, it touches on the vulnerability of people later in life but also respectfully listens to their advice and continues to intrigue throughout. If there is anything to take away from her music, that is that her voice is incredibly clear and delightful and in many ways ahead of it’s years, she is one to watch for the future, but in the meantime check her album out.

If you want to find out more about Saskia Griffiths-Moore, check out her website here (where you can also get free copies of her EPs).