As part of their “Out of the Ordinary Tour”, Hannah Martin and Phillip Henry are bringing their particular brand of folk to the unusual, historical and downright spooky buildings of the UK. At this leg of the tour I have managed to catch them as they arrive at Derby Gaol; a working, historical museum. From the outside looks like a kind of medieval fort, inside a dungeon shrouded in darkness, the walk up is particularly interesting as in the groups there is a collection of equipment both of execution and pain. It is usually host to it’s own brand of entertainment in the city but for this night only it hosts the aforementioned duo famous for winning a Radio 2’s folk award for “Best Duo” in 2014, playing a show at the Royal Albert Hall (with Show of Hands in 2012) and with producing an array of well-received albums through the years. It is a nice touch to add a bigger air of wonder to your works by performing in these spaces, it brings the history of folk music a little closer to now. 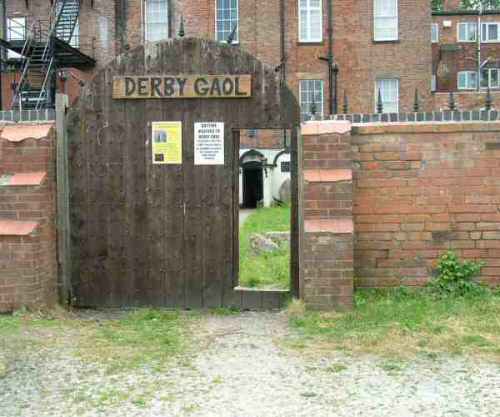 The gaol has been bought by a paranormal investigator and  ghost hunter (Richard Fenix) and has hosted a number of local folk nights over the years, perhaps on a quiet night when the air is still and the crows at bay, you can hear the rattle of chains and the anguish of a musician trying to tune his banjo in the dark. As the shady door-keep eyes the customers coming in he carefully opens bottles of Hobgoblin Gold to pass onward as we sit at tables with themed Gothic candle holders, a skeletons hand held upwards. Guitars are lined up monstrously next to dark figures down the dimly lit corridor, one cannot tell if it is a singer or a prop? The ambience is startling. As everyone is seated we find the duo arrive under the cover of half darkness; we huddle near the coal fire making the night even more special as it spits large chunks of coal and ash against the fire guard throughout the set.

Fans of Hannah Martin and Phillip Henry will attest that I would not have needed any sorcery to appreciate and understand their songs from history, though many of those subjects do touch on the dark and seething underbelly of humanity (some fine folk staples). A combination of interesting instrument setups and changes, and the duo’s crystal-like vocals ensure that there is something quite interesting to hear and with  a nice degree of variety. 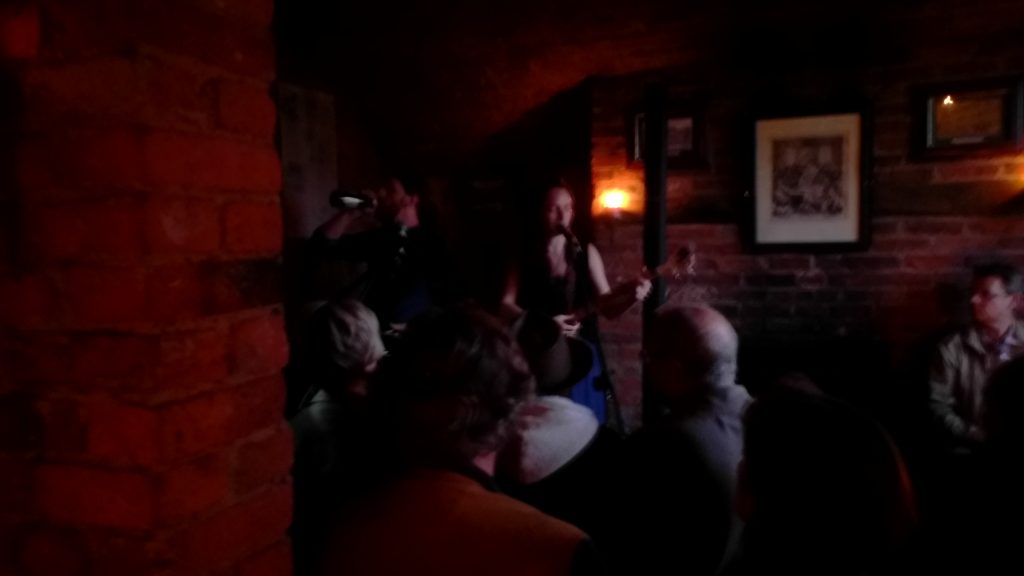 Prior to this show I had only caught snippets of their pretty extensive work even with my best listening efforts, for someone like me “Out of the Ordinary” is the kind of tour that appears to be the “best of” tour in that it covers a lot of ground and is a fantastic catch up. Acolytes of the pair will also appreciate  a reasonable amount of new tunes (maybe 3-4) in the set that they are taking out into the dark (around 2-4 songs). So by all means, their best work is not behind them.

So there is a great mix of older works and newer tunes. “The Last Broadcast” was a lap guitar garden dance in paradise. Following on from Henry’s wry consideration of the number of strings and exactly how many of them would be precisely tuned for the occasion we get a more upbeat numbers. It takes it’s time, waving Asian silks as it goes, showing Henry’s early musical influences in India to their best. For this song it is more a dungeon in Delhi than Derby, but it is excellent stuff. Also there’s the expansive and dynamic reworking of a Morris track, “The Cuckoos Nest” (they figure it could no longer be a Morris track as it had been slowed down a fair bit) leading into “Old Adam The Poacher.” Some lovely vocals alongside guitar and banjo accompaniment, if it is indeed a Morris track putting on the brakes has allowed it’s more winding, evocative nature to come out.

As mentioned, the gig is a good opportunity to catch some newer tracks in development for their next album “EdgeLarks”. “Signpost” was an interesting one. Written in Tasmania by Hannah Martin it highlights the worst pangs of homesickness while you are awash with the blues, “15 miles from paradise… 95 miles from nowhere else.” Looking at the kindness of strangers and losing oneself in a strange place, it is good modern fodder for a folk inspection. “Albatross” is a special track too. Described as a “happy” track, maybe a bright and tangy pickle within a cheese sandwich of cheese, “Albatross” is the duo’s self-proclaimed revival song they penned to explain the endangered nature of these birds (and also folk musicians!).  Martin’s voice is a deep, hushed and undulating song that revels in it’s gentleness, “may the winds of the earth, guide your little boat.” A ditty that smells of fresh breeze and sea salt, it has an understated starkness, so if you like that kind of thing and you like your folk to revealed by the bright, bright sun; this song is for you. This track is available exclusive downloadable number, I find it nestled in the folds of the incredibly practical tea-towel they have for selling. 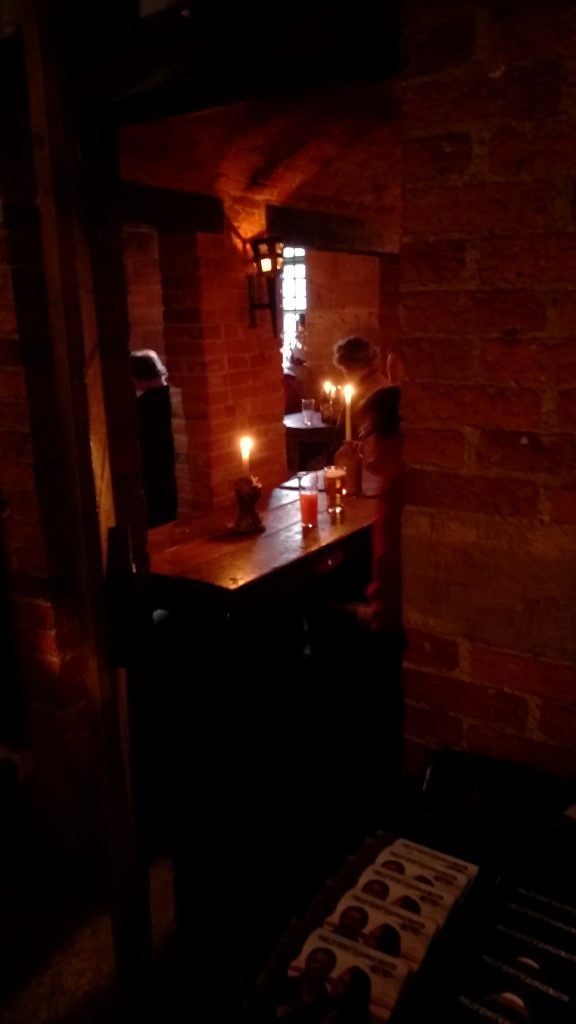 Proficient with multiple guitar, banjo, fiddle and voice; the biggest surprise was probably the foot-operated shruti box and also the performance of “Train; I wanna boogie.” It’s extensively layered time keeping with the beat, and quick pace is an explosion on the harmonica. I have heard songs in different sets that try to recreate the train experience (off the top of my head, “Steamchicken” do this) but very few capture the subtle intonations of the steam train, it’s moving wheels and the klaxon. I’m still not quite sure how Phillip Henry does it, I did not really get a view of him playing the harmonica so for all I know there might have been an actual train on the stage behind that pillar! As with the venue, some things are better kept as mysteries!

An interesting evening and a good showcase of work to date, performances in these places of dark history do get the mind turning and throw in another element to music; it enhances an already selection of songs. Hannah and Phillip share a strength of purpose, some really discerning lyrics and sharp vocals as well as an army of instruments that change throughout the set. An enjoyable evening, a nice idea, head along if they are touring near you.

To check out the spooky locations of their music, check out the website here. There are still a few dates left and a library tour after that.