KARA return with another excellent album called “Some Other Shore” (their debut was also nautical sounding, “Waters So Deep”). The particularities that make the sound and ideas appealing can be boiled down into the three-part approach taken to their writing and recording of folk music. The first part is that their music is heavily thematic in that the lyrics are often worked and adapted from literature and tragic tales from England, Russia and beyond (in a similar vein to wonderful Emily Portman). The second part is that there is a spirited arrangement that uses instruments such as the dulcimer and melodeon that you might not always expect or hear when picking up some acoustic folk which makes it slightly unusual and dfferent. The heavy theme and instrumentation combine together to explain their third angle; a juxtaposition of dark emotion, fantasy and myth that give them an idiosyncratic but incredibly rich and dream-like sound.

On the album we have Daria Kulesh on lead vocals, Ben Honey (guitar), Phil Underwood (melodeon), and Kate Rouse (dulcimer, vocals). Produced and recorded by Jason Emberton (with some additional support from Phil Underwood and Lauren Deakin Davis) it has guest appearances from Lukas Drinkwater and James Delarre within the album which KARA have been promoting on their tour (there are still a couple of venues left, and more the be announced here). 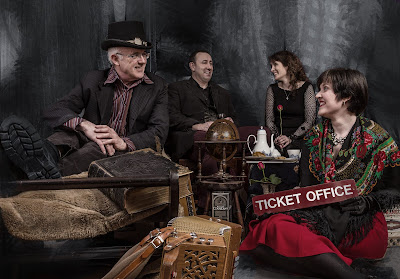 How is the album? Daria Kulesh’s voice is as expressive as ever as it pirouettes on a delicate higher register, the songs vary enormously in rhythm, optimism and tradition and the reach of the vision and image is very far indeed. It manages to be haunting, insightful, and fine balance between modern and old. As Daria Kulesh and KARA like themes, let us consider some of the songs next with some loose themes they could sit next to:

“Lovers’ Task/Black Tea Waltz” is both a reinterpretation and a dance. “Lovers” is a gracious, sensual and capable version of Scarborough Fair as collected by Cecil Sharpe though the band has cast a Russian spell upon it. Like seeing a creature of habit wearing a brand new coat, this telling of one the most well-known popular songs in folk consciousness is trying something different as it lists the slightly different, “setherwood, sale, rosemary, and thyme” as the trademark herbs. It works remarkably. It could be Kulesh’s precise, alpine and lingering lyrics; it could be Kate Rouse’s arrangement or (one of the keystones of KARA) the use of the hammered dulcimer, or it could be the fact that it never hold up. Like a young child dancing in spring it moves and jumps in exhibition without a care. In transition the track moves to the Black Tea Waltz where it becomes like an endless, yawing revolution of joy and light. It is constructed like a book, it opens and unfolds and sings to you throughout and is a great track for it.

Likewise Phil Underwood’s “Hollingbourne/Broadhurst Gardens” is a candidate for a new favourite tune to dance to. The melodeon jigs stirringly and the tracks are imbibed with the both the rural and urban elements of folk music. It seems to speak first of a story of mystery and pursuit (like clue searching in a Parisian hedge maze) before skipping to the amber lights of taverns in town serving a sea of foaming beer. A great original number and a track that should gain a following in the dancing communities. 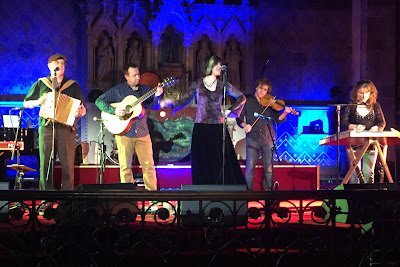 There is as always in KARA’s works a sense of characters and their experiences. Daria’s particular strengths as main vocalist are in her contrasting portrayals of women which are then bravely all added to a single album. Tragic or triumphant she has the range to bring the gloom or fury in equal measure. “Goodbye and Forgive Me” is an example of tragedy as a song of a woman in an unpleasant marriage who seeks the freedom of another man (which does not bode well), “Now this crime it was discovered, swift accusal and arrest, and in exile my false lover, took another to his breast.” The song is based on Nikola Leskov’s 19th Century book, “Lady Macbeth of the Mtsensk district” that inspired Daria during the recent successful “Company of Players” event celebrating Shakespeare. Interesting and sad in it’s deliberation it is a tremendous contrast to track 9.

“Stormteller” is the fury to the previous song’s gloom. A pacy, onomatopoeic number it shows Daria Kulesh echoing the rhythm of the weather in song while she gallops through a speedy, relentless race. Throughout there is a sense of the storm and by the end of the track Daria has pretty much gone full shaman on us. Like Nostrodamus’ secret muse the song is as evocative as ever as it starts from a few quiet drops to a full blown melodic tempest as it builds. The guitar strums are not unlike a mariachi band as Daria applies her voice like the Western Mexico sun as she calls down the the elements, “I am of the black skies, I am of the hail, I am of the thunder, I am of the gale, I am a storyteller, it is them I control.” It’s sense of power is not unlike Sandy Denny’s “John the Gun” but more like Ange Hardy’s earthy Goddess tones of Bare Foot Folk’s “Mother Willow Tree”. A good track for nature lovers. 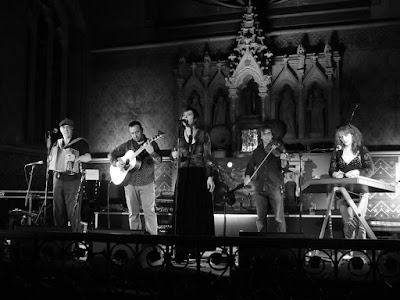 KARAs’ folk music that is undeniable, especially as they do a fair share of recording of traditional numbers too. “Seaview” is one of the songs on the album that brings the shoreline of the title into view (and a delightfully fanciful album cover it is too) and speaks of that familiar, welcoming maybe imaginary place we go to. It is a light and chirpy song that flickers with a nostalgia for old times with family as children, the seaside and the briny air. Peaceful and thoughtful it can be considered along with the folk dance numbers as a familiar but good example of a lightly traditional number. In contrast “Devilry Dance”, the penultimate track is going to different seas and cities for it’s inspiration.

A folk album with surprises is a bright thing indeed, and when there is a swing number as part of that surprise, it positively shines. Don’t get me wrong, KARA are not the first band to experiment and include multiple genres on a disc and won’t be the last, but this is a good lyrical showcase amongst many on the others as it describes the ghastly dance in it’s commanding tones, “it has no rhythm in the normal sense, the steps are as long as they are wide.” It has New York cellar bars all over it proving that KARA rebelliously puts its feet in different countries and times and is not content with being the already well established English/Russian lovechild that it is. 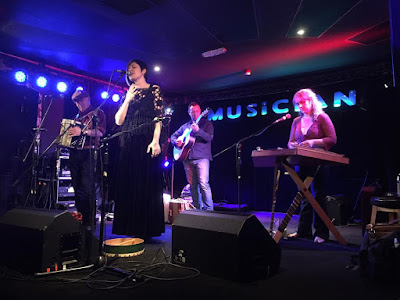 “Some other shore” is quite ruminating. It will appeal to trad-folk fans that is for certain, but it’s appeal goes beyond the nods of the heads it gives to the Waltzs and the knowing looks to songs about salty sailors and the trades of old. It is a prime example of expert synthesis of literary and emotional experience which is confidently playing with some alternative instrumentation that holds you in a magical gaze. More confident than the debut, and deeply magical to the ear; it is an accomplished work.

Check it out, it won’t disappoint!

Album Title: Some Other Shore

Mastered at: The Green Room

Track 4: Goodbye and Forgive Me

The album is available from KARA’s website directly here for £10.