Ahead of the “Underneath the Stars” Festival 2018 (running 20-22 July), as fans of folk music and the wider spectrum of folky related things, we spoke to a number of artists leading up to this sunny and exciting event.

If you missed our first set of interviews, you can find discussions from Dutch-soloist “Pitou” right through to captivating Syrian “Maya Youssef” here http://folk-phenomena.co.uk/2018/07/18/underneath-the-stars-2018-interviews-1/. It is all lining up for something special.

We have more conversations up our sleeves though, more voices from the musical world, more wells of inspiration and even more star value. Please, come inside, make yourself some juice and find a sun-lounger, here is part 2 of our whistle-stop artist interviews for “Under the Stars 2018” https://underthestarsfest.co.uk/

First up, we had a chat with Jack Rutter. Jack Rutter is from West Yorkshire. Aye, it’s pretty fine, I certainly saw some sights when travelling from Huddersfield outwards when I lived there; one of my favourite things is the Slaithwaite Moonraking Festival (which I’ve not gone to for a few years.. need to check it out again). Jack is firmly in the traditional vein of things when it comes to songs, and he does them so well. Here is what he had to say!

Jack Rutter will be performing on the Little Lights Stage on Sunday 22 July.

I: Tell us more about yourself?

Jack Rutter: Ooh that’s a tricky one, I love singing all of them and I like them all for different reasons. I suppose one that always goes down well is the Dalesman’s Litany which I learnt from the wonderful singing of Dave Burland.

Jack Rutter: I’ve been to Underneath the Stars a few times in the past playing with different people and I’ve been blown away by it as a festival every time, it’s just so well put together with the sound and the decorations around the site and the food and the whole thing! To be honest I also love the fact that it’s pretty much on my doorstep, so my journey to the gig is particularly easy.

Jack Rutter: Another tricky one, there’s so much on! I never pass up a chance to hear Lau, Grace Petrie’s also wonderful, I’m really excited to hear Midnight Skyracer as I’ve heard so much about them, Damien O’Kane and Rob Block’s banjo extravaganza promises to be utterly joyous, and watching a Kate Rusby gig is always truly special.

Jack Rutter: More gigs and singing and playing and pootling about throughout the summer and into next year. 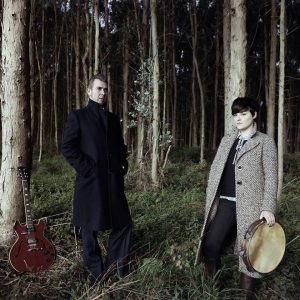 We are not sure what to expect from L-R. Billed as a duo who use original and traditional instruments (such as tambourine)  but with a sound that is “post folk”, it is a bit like waiting to see what lies behind the black curtain in a cabaret act. Nevertheless, Asturian music might be the key to unlocking inner harmony and we were pleased to have a moment with them.

L-R will be performing on the Little Lights Stage on Sunday 22 July.

L-R: L-R is a duo from Asturias, in the north of Spain. We mix traditional songs and tambourine playing (which is a very important part of our traditional music) with the modern sounds of the electric guitar and pedal effects.

L-R: If we had to describe it in five words it’d be: “21st century Asturian traditional music”.

L-R: We’ve honestly never thought about it but if we had to make a choice it would be the “muiñeira de Degaña” which is the first song we arranged. It’s a traditional dance song from south-west Asturias with a Delta blues slide guitar backing. It’s a big success in every concert.

L-R: We’d really love people come to our gig and get to know Asturian music, especially what we do. Some people might know some tunes from bands like Llan de Cubel but I don’t think the tambourine and singing tradition is very well known. So please come see us and you’ll be in for a treat!

L-R: The festival line up is so amazing that we couldn’t pick one artist. We’re big fans of Steve Earle, Lau, Kate Rusby … but we’re discovering many great bands in the line-up and can’t wait to see them live!

L-R: After the festival we have a few more gigs in Asturias for the summer festival season, in the traditional circuit but also bringing our music to new audiences as we have to play even in surf festivals! There’s a new recording getting ready for the autumn and a tour of Brittany (France) next winter.

Estbel is an incredibly slick operation. They’ve been all over (including Celtic Connections) and do not seem to be showing any signs of stopping. A hybrid of Estonia and Belgium in influence, their music is rich and confident. At times they sound like the very essence of the world itself, we cannot underestimate the natural tones of their song and are grateful to see them bring a different flavour to South Yorkshire.

Estebel will be performing on the Planets Stage on Friday 20 July.

Estbel: Estbel joins together the best Estonia and Belgium have to offer. On one side you get the Nordic beauty and serenity, on the other the finest sons of the heartland of European folk music.

In February 2016 the Dhoore brothers and two Estonian nightingales spent a week in Saaremaa looking for a common sound, vision and feeling. They found it and only a year later presented their first album Saar/Island – an homage to where it all started.

The album, like Estbel itself, is full of rare original tunes combining compelling Flemish melodies and beautiful Estonian singing. This is a combination you have to hear to believe!

Estbel: Well, I don’t think we have a “one and only” favourite song. Or we might each have different ones. But one of the main goals for us while making this program, was to make songs that we all love to play. And I think this has worked out pretty well. We all enjoy bringing the music we do.

Estbel: We have heard so many great things about this festival and we are very much looking forward to play there. Estbel had a spring tour in UK this spring (2018) and we enjoyed playing there very much. It is always great to bring your music to new audiences who have not had the chance to get to know you yet. It is the same like making new friends.  We are looking forward to share our music with new audience and we also hope to have a chance to go and see some other concerts.

Estbel: Well, the line up is really great. We are looking forward to see LAU, Yves Lambert Trio, Laura Cortese & The Dance Cards and surely some great bands we don’t know yet. But I think the most special one for me (Leana) is seeing Kate Rusby live. I remember being 18-19, listening to her “Underneath The Stars” and being totally blown away by it. So, it is a great honour to play at the festival that is named after that great song.

Estbel: After Underneath the Stars Festival we will be playing at Music on the Marr. And in August we will have a week of concerts in one of our home countries – in Estonia. Which we are also really looking forward to, as summer is really magical in the North.

Kizzy Crawford is a very exciting prospect. As an artist who speaks Welsh, has Bajan heritage and ahead of her debut album is unstoppable in her drive to create and inhabit different genres. She has been to Cheltenham Jazz Festival, she has been on Radio 4, and now she is here in South Yorkshire. We suspect she is going to make some big waves, check her out.

Kizzy: I was born in Oxford but moved to Wales when I was 3, I grew up surrounded by the beautiful Welsh language and culture which greatly inspired me to start writing and singing my own music. I felt different to the other kids in school as I was the only mixed race girl and was also very shy, I used the Welsh language and culture to help me fit in and feel at home. If it wasn’t for this I don’t think I would have ever started writing my own music.

Kizzy: Golden Brown/Brown Euraidd, as the message in the song is a very important one – that everyone is beautiful inside and out. In the song I am talking to my younger self, teaching her this message, to not listen to the bullies and to be proud of who I am, everytime I sing this song, I confirm this message to myself which makes me stronger.

Kizzy: Im looking forward to showing the people of Yorkshire my sound and to checking out the other artists

I:  What’s next for you after the festival?

Kizzy: I will be releasing my debut album, which has been a long time coming, I can’t wait!

Rather new, but also rather well known on the circuit at the moment, “Midnight Skyracer” are the ass-kicking all-female bluegrass band with a number of fine instrumentalists drawn from the UK all together in one place. We are particularly excited to hear the women tear it up.

I:     Describe your music in five words?

I:      What’s your favourite song to perform and why?

MS: Any fast train song in the key of B

I:      What are you looking for to most about performing at the festival?

MS: We love performing and the response we get from audiences, so that. But also looking forward to meeting up with fellow musician friends – festivals are great for that.

I:      Who else are you looking forward to seeing perform at the festival?

MS: Our friend and banjo hero Ron Block – but I think we miss his set for our sound check!

MS: More festivals! We have at least one most weekends this summer.

We can’t wait for this lot to take the stage.

Once again it is a fascinating cross-section of artists who will be there, and we have barely scratched the surface.

Get yourselves down to CinderHill Farm and let the sounds wash over you. It is all good, you most likely deserve it.. we definitely think so.