For one night only the Studio space of the Crucible was turned into a a kaleidoscope of story, wonder and history with a combined storytelling and musical performance of “Fire in the North Sky” by Adverse Camber. There were birds, bears, men forging with gold and silver, and other incredible creations told and performed from the Kalevala, a hundred thousand lines of collected story traditions from ancient Finnish history so rich in material you feel that the show barely scratched the surface of the epic. Collected by Elias Lonnrot in the 19th Century it was brought to life by Adverse Camber, an independent production company that curates original, expansive stories from another time and another place, and works with artists and venues to transmit these tales more valuable than silk to a modern audience. They are quite local too coming from Derbyshire, and much like their other recent work I reviewed, The Shahnameh (here), there is an energy and excitement to their show which balances the need for telling stories that stand up on their own merits. Not only this but the company manages it without unnecessary set-pieces of over-the-top props that could dilute the richness of the story, the oral tradition takes centre stage. Credit to the producer, Naomi Wilds for shaping the show and director (Paula Crutchlow) for moving the pieces, the Studio was a particularly good choice to host such a program. The decision to use the Crucible Studio meant that quite an intimate connection could be forged with the audience that neither cramped the audience or dwarfed the performers; much like in Goldilocks, the size was just right. The words flourished on the boards of the stage and there was no danger of there being much empty space in the audience as the pre-show interest must have been immense with the studio being fully packed out to the gills and rapt in attention.

“Fire in the North Sky” does not have a single theme as such running through it. It is a series of stories with certain characters rotating, appearing and disappearing into the ether which echoes the variation and improvisation of these sung stories in antiquity. Like a river the whole thing moves a winding course as a necessary and inescapable aspect of storytelling but there in presentation there was evidence that the tales chosen are sufficiently different in order to provide at least one tale of interest to each audience member. There is a cast of four and all are utilised in connecting to the audience in a different way; Nick Hennessey took the lead in the engagements and telling stories, Anna-Kaisa Liedes and Kristiina Ilmonen brought a bewildering myriad of voice improvisations and Tima Vaananen performed his kantele playing skills throughout linking the stories together. It does mean there is something that everyone will enjoy and given as the performers are folk story and music academics, there is a feeling of being part of something that is well researched and conveyed that adds an extra dimension to the raw draw of a pub yarn from old friends.

With the stories themselves there is certainly an interesting array with several of them touching on the notion of humankind, godhood and the pure power of knowledge. As expected there is morality seeping through the seams where some questionable choices are made by the characters but there is also the heroic ideal shown with individual mortals making bold and beautiful choices in this a strange ancient world. A favourite is the story of Ilmarinen, the blacksmith who upon losing his wife decides to forge a new wife from gold and silver to “fill the space” on her pillow and bed where her head and hip were. 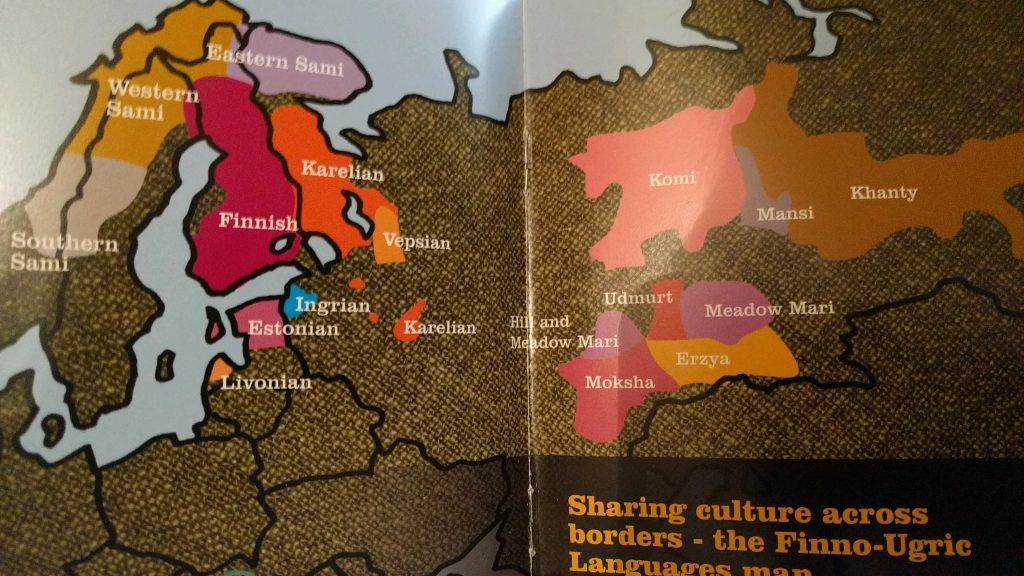 Despite his toil and looking like he would fail at some point. he does indeed forge a new women but comes to to the realisation that she is cold to the touch. It is part allegory for the futility of substituting human love for material love and part warning of the limits of man’s power (especially well communicated by Nick Hennessey who you can practically smell and feel the sweat and scorching tools as he works the blacksmiths fire).

In another story, Ilmarinen is being forced to forge the Sampo, a magical mill that creates grain, salt and gold, a veritable philosophers stone plus. An enigmatic device to us, but clearly the most life sustaining and valuable commodities of the age. Here both Anna-Kaisa and Kristiina Ilmonen create a vivid scene as the metal goes in the fire and comes out in a number of forms such as a crossbow, a ship. a cow; in the audience the tension rises and the instrumentalists add layers of wails and hisses that are somewhere between creature, human, and material. There is a noticeable breadth and variety of sounds that emerge of a degree and quality I have not yet heard in equal during another storytelling event. At times in the show it felt like you could get lost in thick conifer forests that had sprung up around, and the lush grasses had risen from our seats for the precision of the elements of the soundscape that are introduced are second to none.

There are also some other familiar figures such as shape-changing witches, the magical musical player Vainamoinen who brings to things to life with his kantele, and Lemmionkainen a youth restored to life through the maternal questing on his mother; it is an exciting spectacle from a rather unknown storytelling region from my own experiences, but on that draws parallels to other more familiar cultures, e.g. Osiris in Egyptian mythology for example who body is pieced back together. Tima Vaananen certainly brings some magic with the music throughout and the authentic addition of this old instrument seems as essential as the Finnish self-deprecating wit. It’s presence acts like the thread that holds the seams of the epic together. The theatre experience is encapsulated with a free programme that is given out which explains the song and story style, the history of the region, and crucial information about the characters focused on. It is a good starting point for anyone keen to learn about Finnish myth an itself a nice souvenir.

In just the two Adverse Camber productions I have seen I have been impressed. There is a great variety between the two but both share a great selection of stories, the curation of some less obvious but interesting material for the audience, and some warm story-telling. Out of the two, Fire in the Sky had a bigger cast, probably more musical and backing variety (but then there is a bigger cast) than the Shahnameh. The Studio allowed the story to progress across the bigger space but the Shahnameh necessarily had to make more creative use of the space and set pieces when I saw it in the smaller Derby venue (which did add some charm). They are minor comparisons and differences, both are a great showcase of talent, a veritable saga of morality and creation, and most importantly an enjoyable night. If you get the chance to see an Adverse Camber work go and see, prepare to be educated and entertained in uncountable ways!

If you want to check out Adverse Camber and their upcoming work, check out their website here.

I do not claim ownership or copyright on the above publicity pictures, see Adverse Camber’s website for more information.